The Alt Empordá in the province of Girona will never cease to amaze you. It is a perfect place for sightseeing as a couple or family throughout the year. We say that 'Girona falls in love' and that is that our province has everything. Beaches, gastronomy, wines, culture, nature, festivals, medieval towns.

Today we present 3 charming villages , each in its own style and personality, located between the impressive mountains of the Pyrenees, natural parks and the calm of the Mediterranean Sea.

Just 10 minutes by car from Torremirona , we find the town of Besalú . Besalú will surprise you as soon as you enter, with its impressive 11th century medieval bridge. Walking through the streets, it seems that the town has stopped in time. Discover the Jewish quarter or the Portalet wall or the Sant Pere monastery .

A curiosity: part of the film ' The Perfume ' was filmed here, based on the novel by Patrick Süskind. 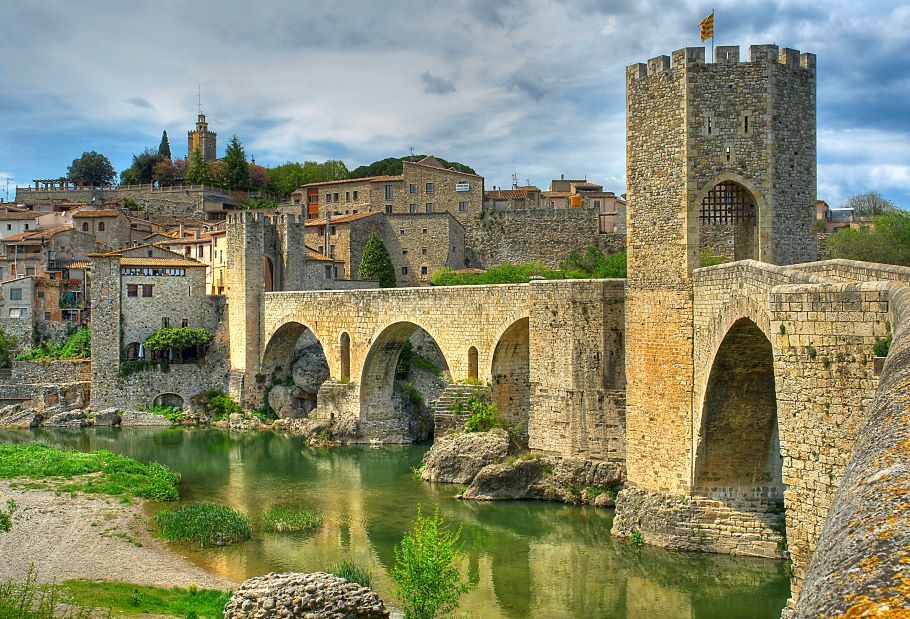 Do not leave Besalú without trying the gastronomic specialty of the region, the ' volcanic ' cuisine with delicious dishes with ingredients from the area.

The Pont Vell Restaurant always surprises its visitors with its magical location, at the foot of the medieval bridge, in a stone house and with its beautiful views of the iconic municipality.

In the center of the town, and located in a historical building, after several reforms for different uses such as the courthouse and monks' convent, since 1977 the Cúria Reial Restaurant offers highly recommended, homemade and creative market cuisine.

Cadaqués , the 'lost' town in the Cap de Creus Natural Park , traditionally fishing, is now one of the best-known and most visited towns in Girona.

It is famous because Salvador Dalí and his artist and intellectual friends used to spend their holidays here. The House Museum , located in the Bay of Portlligat was the artist's only stable house, where he lived and worked until the death of the love of his life Gala

But also other personalities such as Marcel Duchamp , Joan Miró or Pablo Picasso had their holiday homes here for years and left their trail in the town that has artistic corners and a bohemian and authentic atmosphere.

Be sure to visit the Santa María church , located in the upper part of the center and the labyrinthine streets of the old town, adorned with white houses.

Without a doubt, the images of Cadaqués and its unique location make this town one of the most charming places on the Costa Brava. It is not surprising, therefore, that gastronomy makes a place for itself among its streets.

In 2012, Oriol, Mateo and Eduard, colleagues of Ferran Adrià at the famous restaurant El Bulli, took the joint initiative to transform the concept of "Pica-pica" with their Restaurante Compartir . With the dish in the center of the table, the atmosphere undoubtedly leads to creating a pleasant atmosphere for enjoying modern-style cuisine, or also your more traditional proposals.

If you are one of those who cannot resist tapas and rice, and you want to feel at home, you can go for Casa Anita , one of the oldest restaurants in Cadaqués located in a town house.

It is a town belonging to L'Escala and has only 60 inhabitants. But Sant Martí d'Empúries is undoubtedly a "must" to visit during your getaway to the Costa Brava.

And is that a few meters from the town, Empúries was the gateway to Greek and Roman culture to the Iberian Peninsula. Empúries, which in ancient Greek meant "port of commerce" or "market", is now one of the most important Greco-Roman archaeological sites in the Mediterranean.

Discovered in 1908 at the initiative of the Barcelona Board of Museums, chaired by Enric Prat de la Riba, and thanks to the initiative of the architect Josep Puig i Cadafalch and his team, the Empúries site is still alive today, with expeditions that They allow us every year to build the story of our history. A visit to the Ruins of Émpuries , home to the Museum of Archeology of Catalonia, is a guarantee of entertainment and a source of culture for young and old.

There are few, but great options to enjoy gastronomy in this unique town. The Mediterranean gastronomy is manifested in the restaurants that you will find in front of the wonderful church of the town. Among them, L'Esculapi , El Mesón del Conde or La Terrassa d'Empúries are the favorite restaurants of its visitors.

Cookies and other similar technologies are an essential part of how our Platform works. The main goal of cookies is to make your browsing experience easier and more efficient and to improve our services and the Platform itself. Likewise, we use cookies to show you targeted advertising when you visit third-party websites and apps. Here, you will find all the information on the cookies we use. Furthermore, you will be able to activate and/or deactivate them according to your preferences, except for any cookies that are strictly necessary for the functioning of the Platform. Keep in mind that blocking certain cookies may affect your experience on the Platform, as well as its functioning. By clicking “Confirm preferences”, the cookies selection you have made will be saved. If you have not selected any options, clicking this button will be the same as blocking all cookies. For more information, please consult our Cookie Policy.

These cookies are necessary for the correct functioning of the Platform, and they cannot be deactivated on our systems. Generally speaking, they are configured to respond to actions made by you when requesting services, such as adjusting your privacy preferences, logging in to your account or filling out forms. You can configure your browser to block these cookies or alert you when they are present; however, some parts of the platform will not work without them.

These cookies allow us to count the number of visits and sources of traffic in order to measure and improve the performance of our Platform. They help us to know which pages are the most and least popular, and how many people visit the website. If you do not allow these cookies, we will not know when you visited our Platform.

These cookies enhance the functionality and personalisation of the Platform. They can be put in place by us or by third parties whose services we have incorporated into our pages. If you do not allow these cookies, some of our services will not function properly.